“Living in sin.” Most of us have heard the phrase. For Catholics, it’s usually used to describe a couple who is living together and partaking in a sexual relationship outside of marriage in the Catholic Church. Today, however, that phrase is being scrutinized as inappropriate and insensitive to those living that lifestyle.

Since we are all technically “living in sin” because we’re all sinners, the phrase doesn’t exactly enlighten someone to the seriousness of the sin of fornication (any sexual intimacy with a person outside of marriage before God in His Church) but rather points more to the sinner and less to the sin. It certainly doesn’t mean it’s necessarily an insensitive phrase, but rather not descriptive enough, and doesn’t bring to light the reality of how severe this sin is.

Catholics who have sexual relationships before getting married, are married under ministers from other religions, or partake in only a civil marriage, do not have a marriage (or relationship) that has been blessed by God and His Church. This blessing only takes place when the marriage is blessed by a Catholic priest; otherwise, the relationship is not considered “valid” (legitimate, or real) by the Catholic Church, and for Catholics it results in “living in sin” (fornication).

Many marriages are not of God and do not please Our Lord.
–Our Lady of Fátima

Marriage is a beautiful, holy sacrament. Like the other six sacraments, marriage, when lived well, delivers many many graces and blessings from God. In the sacrament of marriage, God binds male and female together to become one in the flesh for their whole life in order to receive those blessings (cf. Genesis 2.24). Sadly, today many have forgotten the convenient men and women are supposed to make to each other before God.  This covenant has instead been diminished to a fleeting promise, almost a temporary statement, or something meaninglessly spoken simply for tax or social purposes. Many seem to have forgotten that it is a life commitment vowed before God.

Many think getting married in the Church isn’t worth their effort and there are some incredible hurdles they must jump through. Unless someone, who has been civilly married or married in another faith, has been divorced outside of the Church, receiving the sacrament of marriage is easy…almost effortless. Even if someone has been divorced, doing what it takes to not live in mortal sin is worth our efforts.

Regardless of whether a sin is committed by few or the majority, that doesn’t diminish the severity of the offense against God nor make it less sinful. Surprising to many, those who live this lifestyle are spiritually dead (living in mortal sin) and deserving of hell. Yikes!

Many suffer from the sin of fornication, knowing it is wrong but justify their behavior as acceptable for any number of reasons. We must bring all of God’s children to the light buy telling them the truth today and help them strive for a life of holiness. Nobody should live their life thinking the Church or anyone else is fine with them living in any kind of sin and our silence does just that.

Most souls go to Hell because of sins of the flesh [sexual sins]. — Our Lady of Fatima

Of course, in telling people who are living in sin about the seriousness of their actions, we should try not to label the people themselves (which can be hurtful), but instead label their sin in order to help educate them about it and lead them away from it. If we do not warn them (or remind them, if they already know) about the sinfulness of that lifestyle, we could be allowing them to hurt themselves both in this life and in the next.

Remember in the situation of Sodom and Gomorrah when God expected the people to already understand the seriousness of their immorality, nobody told them a head of time, that knowledge was given to them from creation. However, God did warn them, through Abraham, prior to destroying the cities as a punishment. We need to warn the people too of the consequences of any sexual immorality to spare them great suffering on earth and for eternity.

People have forgotten that we are called to do all we can to remove sin from our lives—especially mortal sin—whether it’s fornication or another grave sin, as these sins destroy lives and one’s eternity in Heaven. (See mortal sins as defined in the Bible). Even if fornication was a venial sin, due to complete ignorance, that sin is still serious and damaging to one’s relationship with God and harms their bodies as well.

Flee immorality. Every other sin that a man commits is outside the body, but the immoral man sins against his own body (1 Corinthians 6:18).

This is something we MUST teach people, since we are called to save the lost sheep. Not mentioning that something is indeed a sin—in order to avoid offending people to hopefully keep them in the Church—doesn’t save anyone’s soul and furthermore, holds us liable to God for the souls He called us to save with the truth.

As far as the phrase being inappropriate and insensitive? For me, it isn’t. I once lived a life committing fornication; I “lived in sin.” Yet, if I heard that phrase I would’ve said, “Ok, well, we all sin. I’m no different than anyone else.” For me, I thought fornication was seen as no big deal in the Church—it wasn’t ever something that I’d heard mentioned as being seriously wrong. However, that very sin was destroying my life, broke my relationship with God and cut off the grace God wanted to give me to help me live the life of joy and peace God had planned for me. Sadly, nobody loved me enough to tell me the truth about what I was doing and that it was a mortal sin, or about any mortal sins for that matter and the destruction they caused.

Outside of abortion, no other sins were treated as if they were something serious enough to try to avoid, much less mention. Yet, all mortal sin caused eternal anguish; we should talk about all of them. I understand it might be hard sometimes to speak about how someone might be committing mortal sin especially for people who think they are “holy”, some can find that very offensive, but we have to be brave and take what ever cross might come our why for loving them enough to tell God’s children the truth. Of course we need to address these issues in the most loving way we can, but at the same time making sure as to not avoid any topic which if left unaddressed could dam someone’s soul. This is our calling and the cross we are chosen to bear. The truth will save souls.

I appeared to be a nice, loving spiritually dead person, who seemed to be a great parent with wonderful children; I appeared to have it all. Yet, I didn’t possess the most important thing of all—grace for eternal life—because I was blinded in my mortal sin searching for worldly pleasure. If someone didn’t know I was married by a justice of the peace they would’ve never known I was without sanctifying grace and deserving of Hell since even my other sins, which were many, weren’t that apparent; yet the longer I remained in the state of death, the more obvious my sinfulness was to others.

Not everyone who is dead in their sins is a monster or seemingly worse than everyone else. I appeared great from a worldly perspective, but the truth was I went to Mass and committed sacrilege against Our Lord week after week by receiving communion in a state of mortal sin. Nobody ever told me someone does harm to their soul by receiving Jesus in the Holy Eucharist while living with unforgiven mortal sin on their soul. I knew it was “wrong” to live together and not be married in the Church, but I justified my behavior as being “no big deal” since everyone else acted like it was no big deal. 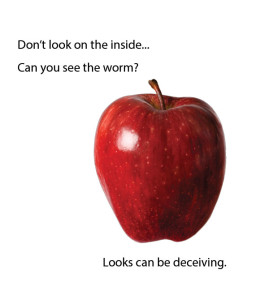 If someone could’ve read my soul they would’ve seen that even though I looked great on the outside, I was rotten on the inside. I seemed to be a beautiful, red, shiny perfect apple to the naked eye, but in an unnoticed area there was a tiny hole where a worm had gotten in and destroyed my inners. My soul was simply hideous. I went to Mass on Sunday but not because I wanted to praise God. I didn’t pray a single prayer. I parroted prayers, smiled, donated money and thought about my day during the Mass. I attended church because I felt I had to be seen as a “good” person, and I didn’t want my reputation reduced to being seen as less than my neighbors who didn’t go to church. I wanted to be the good role model to those around me, and I knew “good” people went to church. That’s the mindset of a spiritually dead person.

I wasn’t always dead in my sin. Before all of that, I went to Mass out of love for God, but I committed a mortal sin and it slowly took over my soul and the grace that was once there left as I never repented from that sin since frequenting reconciliation wasn’t something that was introduced to me. Then over a period of time, I forgot most of my faith, became confused as to what was right from wrong, and committed many more mortal sins; plus my intentions for doing almost everything became sinful. I was prideful, selfish and full of self-love—among other things—and nothing that I did was for the love of God. That’s what “living in sin” does to a soul—or should I say “living in mortal sin”, and this can happen with any mortal sin, not just fornication.

I’ve known people struggling hard in life trying to fix their problems, not knowing those problems were caused by their choice to live with someone outside of marriage (fornication) or any other deadly sins, which kept them from receiving God’s grace and weakened their ability to avoid other mortal sins, while they daily begged God for help. People are trying to fix their problem, yet they aren’t looking to their sins as the culprit and the cycle of depression and pain continues. Mortal sin ALWAYS hurts, and we must educate and direct people, with love, away from their sins. That’s what Jesus did and what we are called to do too. That is how to be truly loving to people.

We should never judge a book by its cover. If we preach the truth to everyone—regardless of how they “look”—then those who have ears to hear will desire to repent, change and live a life of “real” joy with sanctifying grace, wanting to grow in holiness, uniting themselves with God.