When one is trying to follow God’s commands and live a righteous life, they can still be tempted and sometimes fall into Satan’s trap of not loving—and even looking down upon– those who lack the grace needed to live God’s Word.

It was Easter Sunday, and I was sitting outside of the church praying when some of the people who frequently help out at Mass arrived early. I overheard one of them say in a condescending tone, “Oh the CEO’s are coming today.”(CEO-Christmas and Easter Only). Then one of the others began to mock and belittle the very people we’re supposed to love and bring into the Church. Sadly, the overall tone of the priest’s homily was neither warm nor inviting. He even made an insulting comment—in a joking way—towards the people who didn’t regularly attend. I sat in my pew thinking, “Gee that isn’t nice. I wouldn’t want to come back to such an unloving church.”Of course, it can feel frustrating to see so many Catholics in our community who aren’t obeying God’s command of attending Mass every Sunday. They are suffering from mortal sin and most don’t even know it. However, rather than being frustrated, it should instead bring our hearts to deep sadness knowing that so many of God’s children are suffering from sin, don’t have a true relationship with God, and are lacking the very graces they need to live a life according to God’s priorities. These poor souls are missing the great joy that can only be found through the blessings that God’s grace delivers through the sacraments and when we obey His commands. 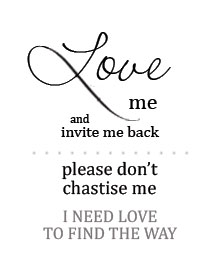 We should respond to these lost people with much joy — a great welcoming — as well as with the genuine love of Christ pouring out of us for at least seeing them during Easter and Christmas. Then perhaps that joy from our welcoming could soften their hearts and nudge them to find the Lord who is calling them to Him. People respond mostly with anger towards the “guilt or chastisement” form of inspiring change. It is true some people can be guilted into change, but the majority will gravitate towards transformation from people and a Church that is loving, accepting and welcoming.

Now, with that said, it is easy to take loving, accepting and welcoming to an extreme and avoid any messages of truth that someone “might think” aren’t loving, accepting or welcoming, which makes the Church more of a clubhouse of companionship rather than a house of God used to transform souls. The entire Bible — every single passage, including the ones telling us what sins cast us into Hell— is a message of love, when they are delivered in a tone of love and not one of condemnation. These messages from God —-delivered with love—- are what the people are truly craving. Their hearts know the difference and will gravitate towards the whole truth. It is true some people will be offended by the truth, but that never stopped Jesus and shouldn’t stop us. Most people are searching for the truth, since the truth is truly what loves, transforms and saves them, which brings about the joy everyone is searching for.